Arrival Airport
Amsterdam Schiphol. You then catch the train to Amsterdam Centraal and bus 107 to Sjeesstraat in Purmerend.

Total Distance
213km/132 miles if all suggested routes are completed

Tour Highlights
• Enjoy peaceful cycling routes only 15 minutes from Amsterdam.
• A beautiful waterside region welcoming you with ponds, creeks and canals.
• Visit the farms, museums and windmills of North Holland.
• Take time out to visit old villages after spending a night in a four star hotel.

The approximate difficulty level for this tour

The first town you can discover during this tour is Edam. Edam was a flourishing town in the 16th and 17th century because of its cheese & fish trade and the shipyard. Edam has a picturesque town center with typical houses and canals which date back from the 17th and 18th century. From Edam you will cycle to Hoorn. Hoorn calls itself “the pearl of the Ijsselmeer”. Hoorn was founded in the 12th century.

After the establishment of a division of the United East-Indian Company (Verenigde Oostindische Companie, abbreviated VOC) in 1602 the town gained international importance. Hoorn is also famous for its well-known sailors such as Willem Cornelisz Schouten and Jakob Le Maire who rounded for the first time Cape Horn in South-America about 400 years ago.

This tour goes through the polder landscape of the Beemster. The polder with it’s well preserved 17th century farmhouses, old rectangular street pattern and the old windmills in the village of Middenbeemster has been classified by the UNESCO as world heritage. The church of Middenbeemster is truly worth a visit.

Route 3: To Volendam and Amsterdam 60km

During this tour you can see and do many things. First of all you can visit the town of Volendam.

Volendam has several particularities: its customs e.g. the inhabitants of the town speak a dialect (Volendams) and on special occasions typical attire is worn, its wooden houses, its fair, its shops and gastronomy which make the city distinctive of other places in Holland.

Further on this tour you will get the opportunity to visit the exciting capital of the Netherlands: Amsterdam. A visit to Amsterdam is certainly the highlight of this bike holiday.

Route 4: To the Zaanse Schans 46km

This tour will bring you to one of the loveliest places of Holland: the Zaanse Schans. The Zaanse Schans is a famous open air museum where you are thrown back into the Holland of the 18th and 19th century.

Between 1961 and 1974 some old buildings of the region around Zaandam have been transported to the Zaanse Schans. The windmills here have carefully been restored.

You can visit the old houses and also a souvenir shop, a cheese farm, a shipyard, a clog workshop, a bakery museum, a clock museum and the only dye windmill in the world.

Route Profile
This tour is based in Purmerend. A rural location only 15 minutes from Central Amsterdam.

Easy and flat and suitable for cyclists and families. 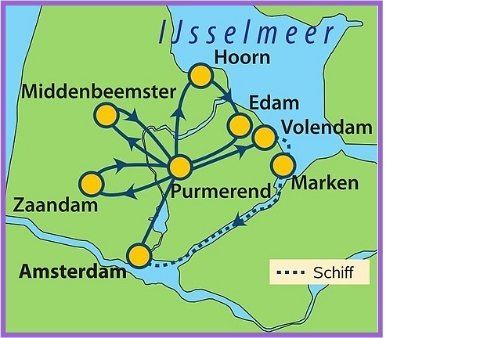 The Amsterdam & North Holland Tour tour stays in a 4* hotel with a golf course carefully chosen for its location, hospitality and proximity to your tour route.

This is a touring bike that is often known as a ‘City Bike’ in Holland.

They are equipped with sufficient gears, a saddle bag, a fix lock and a pump.

The bicycle will vary from the image shown, but will be of a similar type and style.

Holland is flat and the surfaces are brilliant for cycling, so the bikes are equipped with only 3 gears.

Childrens bikes and trailers are also available to rent.

Amsterdam & North Holland, 5 days, 4 nights
All prices are per person and include bike hire.

Any local tourist taxes are not included in the holiday price and are payable at the hotel.