Arrival Dates
Monday: May to September

Amsterdam to Brussels Self-Guided Cycling Holiday
Self-Guided | Individual | 8 days | 7 nights | From £789 per person
Other durations available on request.
Full holiday prices by date are shown on the ‘Book Now’ tab.

Cycle Route: Flat paths
This international bicycle holiday starts in the heart of the Dutch capital and finishes in the epicenter of Europe, Brussels. It’s a one-way route, 340 kilometres long, past a string of exceptional and historically precious Dutch and Flemish towns.

In-between towns, enjoy the peace and quiet of the Dutch and Flemish countryside with age-old farmhouses and dominating church spires. You will follow a well-signposted route that is as good as flat, low traffic or even car free. Only towards the very end does it get slightly hilly. The towns themselves are perfect for touring by bike, ensuring total freedom and mobility: no traffic jams and you can “park” anywhere.

The approximate difficulty level for this tour

Your cycling holiday starts in Amsterdam, one of the crown-jewels of Europe. With so much to see and do, you couldn’t wish for a more vibrant way to kick off your holiday. If you arrive early, make sure to go for a walk to marvel at the townhouses in the 17th-century canal district (listed as World Heritage). Have you got time and energy left? Opt to saunter down the infamous red-light district which attracts millions of curious tourists every year; or enjoy the street performers on friendly Rembrandtplein.

The first leg of the route takes you through the Green Heart of Holland, abounding in water. It is a true cycling paradise, with characteristic peat and polder landscapes, small farming communities and picturesque historical towns such as Oudewater. It was to this place that women who had been accused of witchcraft fled from all over Europe to try to have their innocence proven by weighing. End the day in medieval Gouda. Amble through the beautifully preserved town centre and visit the old town hall and St. John’s church. Stop off at a bakery to buy fresh syrup waffles (Gouda is the hometown of syrup waffles) and Gouda cheese – perhaps the world’s most famous type of cheese.

Would the 79 km be to long for you then you can split this day by booking an extra overnight in Woerden. (48 km and 38 km). Start of the tour will then be on Sunday.

From Gouda you’ll cycle via the “Green heart of Holland” to the village of Kinderdijk, explore the site where 19 windmills have been standing majestically in rows since 1740. They were used to drain excess water out of the low-lying polder up into the River Lek. One of the mills is open to the public. Your destination, Papendrecht, is just a ferry crossing away from of one of Holland’s oldest towns; Dordrecht. Dordrecht is completely surrounded by rivers. Beautiful bridges take you across the water into the heart of town. Around the harbour you will see many monumental buildings.

The hotel in Papendrecht is just 3km outside the center of Dordrecht on the north banks of the river. You can upgrade to ****Hotel Bellevue Groothoofd, if you want to stay right in the center and on the crossroads of 2 major rivers. Here the bike can only be parked outside, in front of the hotel (with camera surveillance).

In the morning, the route will take you right past one of the few remaining fresh-water tidal areas in Europe: Biesbosch National Park. Upon crossing a one-kilometre-long bridge high above Hollands Diep river, you will find yourself in the south of the Netherlands. In village after village, Brabant hospitality will entice you to stop for a cup of coffee and big slice of fruit tart. Today’s destination is Bergen op Zoom. Eight hundred years old, the town’s narrow streets, old squares and hundreds of monuments testify to a rich and dramatic past. Before you settle down at one of the many pavement cafes, don’t forget to feast your eyes on Markiezenhof, the town’s pride and joy. This late-gothic mansion (1485) was built by the local noble family and now serves as museum and archive.

The landscape along today’s cycling route is predominantly woody. On the border between the Netherlands and Belgium, catch your breath in De Zoom – Kalmthoutse Heide, a lovely cross-border nature reserve. The route takes you along the Scheldekaaien (quays on the River Scheldt) right into the historical and touristic heart of Antwerp. It’s the largest town in Flanders and Belgium’s most important port city. After viewing the historical town center you might like to venture to the hip and trendy parts of the city: ‘t Zuid and Het Eilandje.

Have you worked up a thirst for Belgian beer? Consider visiting De Koninck beer brewery. It has been going strong since 1833 and has a new visitors centre welcoming guests wishing to look around and do some tasting. This brewery is best known for its ‘Bollekes’.

After a short stretch on the banks of the River Scheldt, change course to follow the River Rupel, the shortest river in the country (nearly 10 km long). In the region of the same name, abandoned brick works and useless chimneys are silent witnesses of a hard industrial past. Along the River Dijle, enter the age-old town of Mechelen right up to the church tower of St. Rombold’s cathedral. This looks like a good place to stop for lunch. Belgian French fries, by the way, are the best in the world. Continue along the River Dijle to crown your day in the university town of Louvain.

It’s a pleasant town where the oldest houses date back to the 14th and 15th centuries. Don’t miss the Grand Béguinage: Counting 100 houses, it was set up in 1234 as a community for spinsters; and now it’s part of the university campus. You also might like to see the early-Gothic church of St. John the Baptist (1304). Round off your explorations on the Oude Markt (Old Market Square), nicknamed ‘the longest bar counter in the world’ due to the enormous number of bars and cafes on the square.

The hills of Belgian Brabant and the extensive Sonian Forest set the scene for our cyclists today. If you don’t feel like cycling into the big city of Brussels, you can opt to catch a train at one of the stations along the route. Brussel’s main attraction is the fantastic Grote Markt (Great Market Square). Nearby, the little statue of Manneken Pis still draws crowds. Your visit to Brussels can also involve scrumptious hot waffles, chocolate, beer, culinary treats, fun shopping or soaking up a bit of culture. One thing’s for sure: Brussels can’t be explored in one day.

After breakfast, your cycling holiday has come to an end. You can take a flight from Brussels or take the train back to Amsterdam. 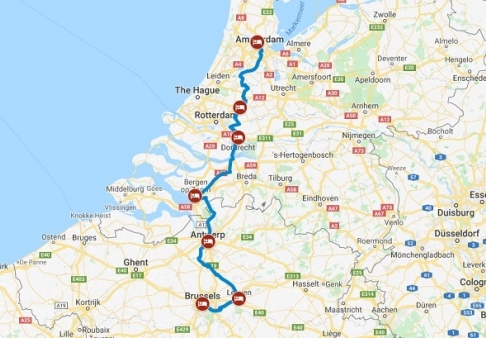 The Amsterdam to Brussels tour stays in 3*/4* hotels carefully chosen for their location, hospitality and proximity to your tour route.

Your stay includes the daily transfer of luggage to the next hotel and permanent assistance in case of problems.

- 7 Nights included
– 3/4 Star Hotels
– Breakfast included, Half board optional
– Tourist information on all the places of interest
– 7-days a week service-hotline
– Luggage transport to your next hotel
– GPS-tracks available

Amsterdam to Brussels, 8 days, 7 nights
Prices are per person and include bike hire.

Prices are based on seasonal date bands
Season 1: May – September
Arrival Mondays

Category A: Prices per person including bike hire
Season 1: From £789 | Book online here >>
Single Room Supplement: From £209
Half Board Upgrade: From £149
Electric Bike Upgrade: From £89

Any local tourist taxes are not included in the holiday price and are payable at the hotel.