Cycle Tour Highlights
• Cycle over the rolling hills of Umbria
• See the many monasteries, abbeys and churches of the region
• Visit the home city of St Francis of Assisi
• See the stunning city of Perugia
• A more challenging route rewarded with excellent views

Cycle Route Profile
The level of difficulty of this itinerary is moderate. The route follows mainly the asphalt low traffic roads and each day you will have to climb a few little steep slopes.

On the last two stages between Spoleto and Orvieto you will have the challenge of some more difficult slopes.

This is the most exciting stage of the tour with many possible stops. The first one is Spello, a walled town with a large number of Roman ruins. You’ll reach then Foligno, famous for its two wonderful town squares. The stage ends in Spoleto, a well preserved medieval village.

Today you’ll cycle among oaks and olive trees as far as Todi, one of the most beautiful medieval cities in Italy, perched on a hill and overlooking the Tiber valley.

You cycle through small villages in the middle of the nature. A variation of the stage takes you to Lake Corbara. On the last kilometres the white tuff cliff town of Orvieto will emerge from the rolling hills. The Gothic façade of the cathedral of Orvieto is just one of the many unique monuments covering millenniums of history.

Today the stage is quite demanding: you’ll cycle through rolling hills, but you’ll be highly rewarded by reaching your destination: Città della Pieve, a medieval village still surrounded by 14th century city walls.

You’ll reach the beautiful Trasimeno Lake and pedal along its northern shores till you get to Magione and its castle. From here take a train to Perugia, a splendid old town surrounded by Etruscan city walls.

You’ll cross the Tiber plain and reach Santa Maria degli Angeli at the foot of Assisi: here many places are linked to the everyday life of Saint Francis. The town will astonish you with its art, monuments and the 13th century Basilica.

Due to organisational reasons, weather conditions or provisions issued by local authorities, the itinerary may be subject to some changes before and/or during your holiday. For example, along the way you may find temporary deviations caused by roadworks, which cannot be foreseen; in this case please follow the indications you will find on site.

The level of difficulty of this itinerary is moderate. The route follows mainly the asphalt low traffic roads and each day you will have to climb a few little steep slopes. On the last two stages between Spoleto and Orvieto you will have the challenge of some more difficult slopes. 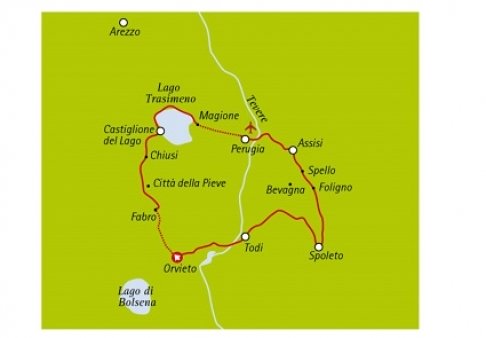 The Umbria and Perugia tour stays in 3* Hotels with one 2* Hotel in Castiglione del Lago.carefully chosen for their location, hospitality and proximity to your tour route.

Your stay includes the daily transfer of luggage to the next hotel and permanent assistance in case of problems.

You will use a bike, which is perfect for the city, but above all suitable for trekking: solid, reliable and with excellent technical characteristics.

Umbria and Perugia, 8 days, 7 nights
All prices are per person and include bike hire.